Christine Dickson of Salisbury U3A and I were invited to attend the Celebration in London on Tuesday 22nd November as we had both been members of the Third Age Trust.

The current chairman, Pam Jones, introduced the speakers. First was Baroness D’Souza who was recently Speaker of the House of Lords. She explained how important and influential it still is in spite of the call for its members to be elected. Her plea was for everyone to become interested in its affairs as the public can make a difference. Our members could get to know a local member, (rather than sending an email which could be ignored among the thousand others that arrive daily) and become directly involved in its affairs.

Eric Midwinter, the surviving founder of the U3A movement, entertained us with lively jokes but also serious praise for all who have worked to make it the huge success it is. It has been a life-line for so many lonely people who can now live positively, age normally in a wholesome way, where birthdays are insignificant. He had these pleas:
1. Continue to avoid tiers which arise when teachers are above learners, organisers above members; maintain self-help with equality for all; develop in spirals where we all support each other, right up to the NEC. Each local member should have a national membership concept as national contribution is essential to maintain the spiral. Isolated units would only stagnate and eventually collapse.
2. There are 13 million third-agers in the UK; calculating all those who have once joined, one in ten are or have been U3A members. A good achievement but not enough! Spread our values even more widely, turn up the volume! Tell every one of the co-operation and joy in learning.

A party for staff and committee, past and present followed. What joy to meet up with colleagues from all over the country, even Northern Ireland, reminding me of those privileged days of working to set up Summer Schools, Online courses, Study Days and, in Chris’s case, editing early versions of ‘Sources’, and visiting new U3As all over the country. What a shame no one from Salisbury has followed us! I do recommend anyone ready to commit the time to stand for election at the next opportunity. Don’t be nervous; one grows into the job and everyone is so friendly.

Visit to Xanten in the Spring 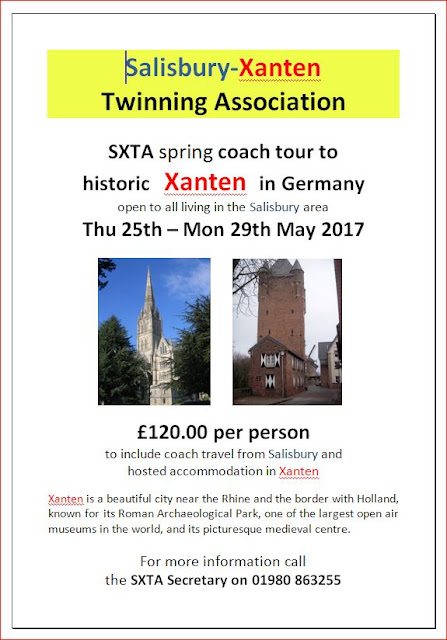 Posted by Salisbury Camera Club News at 12:58 No comments:

The Most Popular U3A Interest Groups

Posted by Salisbury Camera Club News at 14:37 No comments:

Email ThisBlogThis!Share to TwitterShare to FacebookShare to Pinterest
Labels: Message

Message to gardening enthusiasts/interest groups from the editor of Sources

I am beginning to plan the autumn edition of Sources magazine which will be all about gardening. As this is such a popular subject I know that many of your U3As will have groups in this area. I am contacting you to ask you if they would like to contribute to the autumn edition by submitting articles and pictures. I hope it will give plenty of time for members to take pictures of their wonderful projects.

We are keen to hear from all the regular enthusiasts but also those with more off beat themes such as window box gardening, herbs, vegetables and water gardens.

Response to my request for material for maths and science was impressive, but I know the gardeners will have no trouble beating that. If members need guidance I have a guide to writing articles and submitting pictures, which I am happy to send them.
Please ask members to contact me